Decarbonization Blind Spot – Profiting from the planned and unintended consequences

Accordia Group’s Ruby to be featured on 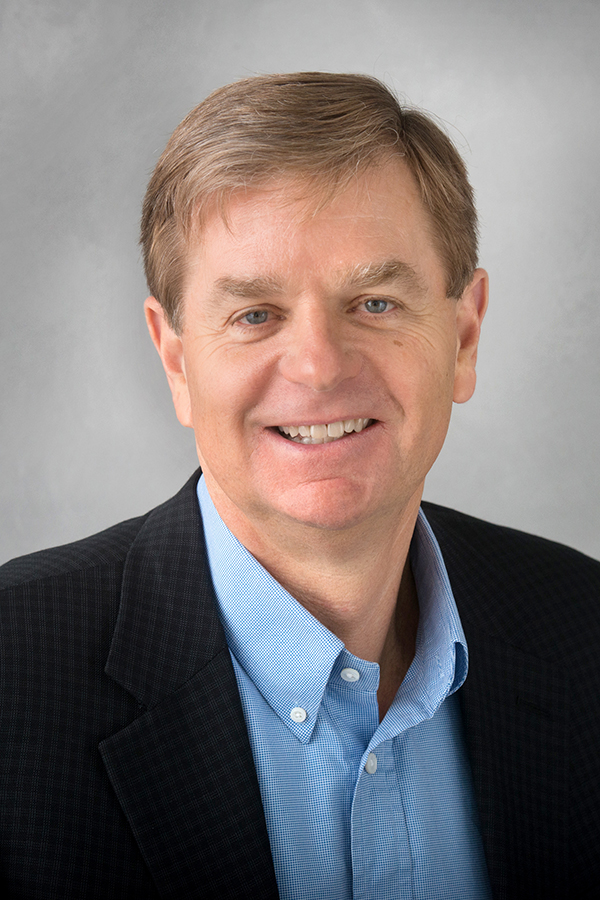 Jim Murchie of Energy Income Partners (EIP) will join Angelo Robles, Founder and CEO of the Family Office Association and David Talbot, Head of Ruby business development on Wednesday, October 6th at 4pm to discuss these issues in depth and consider ways for investors to capitalize.

Jim will describe the Low Carbon ETF strategy that selects the highest quality regulated utility investments which have the strongest history of, and future potential for decarbonization. A top ranked Wall Street energy analyst earlier in his career, Murchie will also share his thoughts about why upstream oil and gas companies may be investable (rather than tradeable) for the first time in three decades.

We sat down recently with Mr. Murchie to get his take on the rapidly evolving energy markets prior to appearing on the podcast. Here are some of the things we discussed.

Today’s news of natural gas shortages in the UK, Brent oil prices through $80, a tripling of spot coal prices, power restrictions in China, electricity price spikes in Europe and surging demand for Liquified Natural Gas, were far from the radar screens last Fall as China was announcing its 2060 net zero target and Biden’s electoral policy message signaled a return to the Paris Accord.

Violent price moves are among many of the unintended consequences of decarbonization policy. So how are these issues connected, how do we move on to reach the net zero goal, and how do we profit?

Three issues which have meaningfully contributed to the current price volatility:

Poor history of capital allocation by materials and energy companies

In the five years following the GFC, massive monetary and fiscal stimulus unleashed a wave of record commodity prices with oil peaking at $140/bbl. Miners and oil companies fought to show growth at any price, bringing a wave of capex and overcapacity, which brought the cycle crashing down late in 2014. In the aftermath shareholders demanded capital be returned and not wasted on unwanted growth, resulting in spending in the mining industry falling to just 25% of peak levels. The oil industry saw similar austerity measures deployed with capex currently running at just 46% of peak levels. Shell’s CFO last week stated its annual upstream capex would remain at $8B whether oil prices were $40 or $120/bbl, a far cry from the procyclical spending habits of the last cycle. 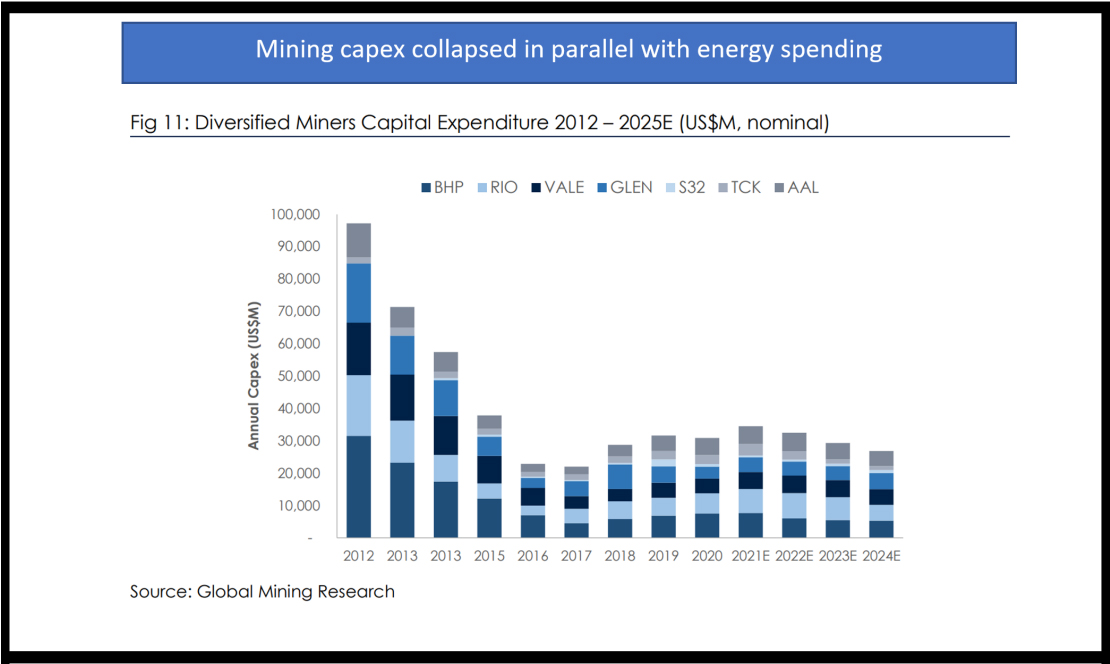 ESG investing has exacerbated these trends. Since Q4 2020 allocation to this sector has risen fourfold from 2019 levels. How much of this is due purely to good intention or from investors seeking to profit from a strong five-year trend is uncertain. However, it is worth pointing out Mark Tinker’s frequent observation, that outperformance by the ESG factor has been a huge beneficiary of an effective net short energy position, which has violently reversed since US election day 2020 from which time energy has outperformed the S&P almost threefold. 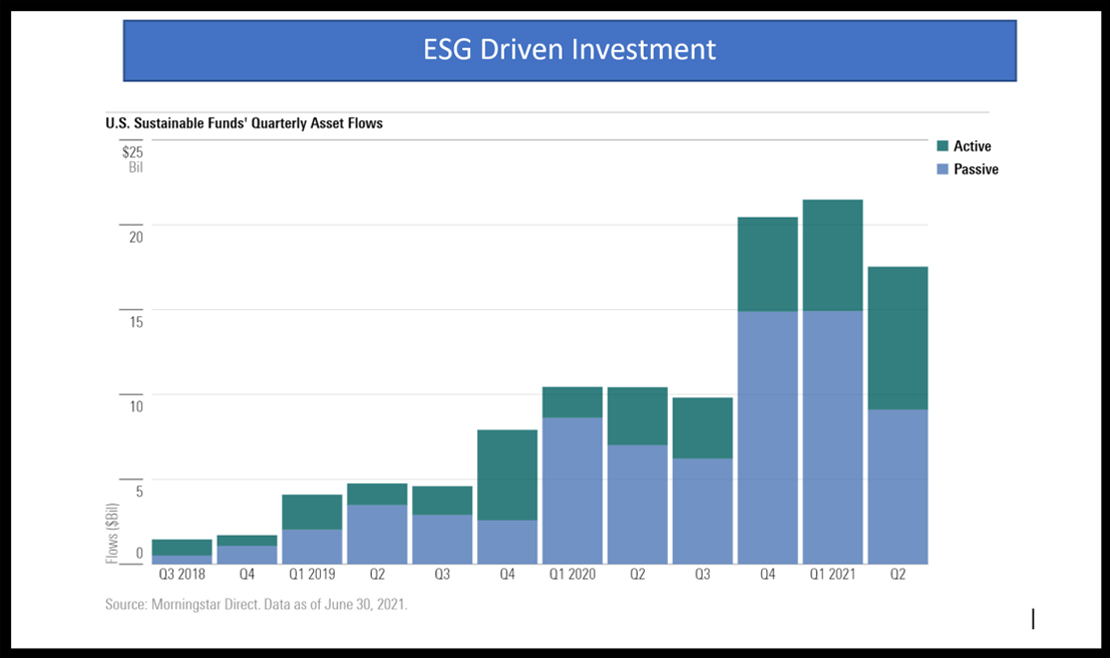 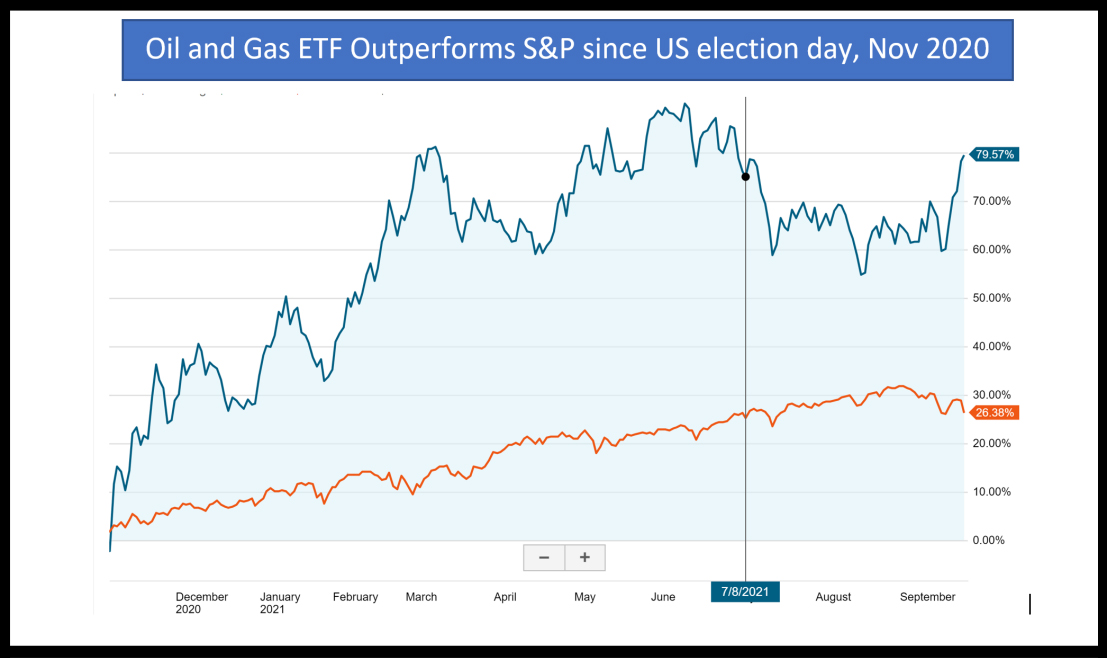 Insufficient fossil fuel intermittency plans on the road to zero

Weather events including drought and low wind speeds have sent demand signals to intermittent backup generators. The aforementioned capital spending restraint in coal, oil and natural gas activities has limited the ability of fossil fuel suppliers to respond, in turn forcing up to a tripling in coal, LNG and natural gas prices. The cost of CO2 emission permits in Europe has sky-rocketed to $75/T. The most efficient backup power should be sourced from combined cycle gas turbines, as they produce approximately half the carbon emissions of coal facilities (0.56 vs 1.2 Tonnes/Mwh), so the ETS scheme is functioning very well. However, the physical shortage of natural gas, a critical fuel on the journey to zero, is a direct result of many policy shortfalls, including fossil fuel demonization.

Energy Should Be Interesting

This website is using one or more 3rd party services that allows it to provide better experience to its visitors.

One of such services is Google reCaptcha.

This website is using one or more forms through which visitors are able to interact with us. In order to prevent unnecessary spam and other kind of malicious content, we have integrated Google reCaptcha service that, in turn, creates several cookies needed for it to function properly.

Website is also employing Google Analytics service to track the ways visitors are coming to it and what parts of the website they find the most interesting. This service also creates several cookies, some of which are listed here.

Any cookies that may not be particularly necessary for the website to function and is used specifically to collect user personal data via analytics, ads, other embedded contents are termed as non-necessary cookies. It is mandatory to procure user consent prior to running these cookies on your website.