Unprecedented decarbonization policy and strategy shifts are creating investment opportunities in energy, materials, carbon and mobility markets. Both the planned and unintended consequences of well-meaning policy initiatives are creating widespread opportunity for the Family Office Association in conjunction with the Accordia Group to lead the discussion with domain expertise, investment ideas, data integration and portfolio reporting capabilities.

Blackrock’s Larry Fink continues to pressure his firm’s portfolio companies to acknowledge, respond to, and measure their efforts towards a sustainable future. Over 400 of the world’s largest corporations and most major governments have issued net zero, or at least net down carbon targets to date. Harvard Endowment last week announced its intention to follow many more politically active asset owners to remove fossil fuel companies from its portfolios. The European Emissions Trading Scheme has led the world in cap and trade carbon policy for fifteen years. Norway has aggressively incorporated both incentives and penalties to promote the sale of electric over conventional vehicles. Germany and Spain have aggressively promoted the deployment of renewable energy which now represents over 50% of generation capacity in each country. China has limited power deployment from polluting coal fired generation for use in aluminum production and delivered stiff penalties to steel producers using sub-standard low grade iron ore. The oil and gas industry has delivered 14 net zero LNG tankers globally, where the gas price reflects the purchase of carbon offset certificates to fully negate the carbon impact of the cargo.

Many of the intended consequences of such policy initiatives are bearing fruit. Capital allocation to ESG related investment strategies has increased dramatically. Despite oil prices rebounding above $70/bbl, US shale production is ~15% below pre-pandemic levels, and the rig count remains at half of previous times. Norway has achieved the highest penetration of electric vehicle sales at 60% of the annual purchases. Former Bank of England Governor Mark Carney was appointed chair of the task force to scale the voluntary carbon markets. The task force believes the size of these markets will grow 60 fold by 2050, and we are already seeing the global Liquified Natural Gas (LNG) producers as aggressive participants. The European ETS scheme has more than doubled carbon prices to over Eur60/T, thus penalizing the fossil fuel power suppliers. Approximately 3% of Chinese aluminum production has been halted, while Chinese steel production has gravitated to cleaner new generation facilities.

However, there are also very significant unintended consequences, which opportunistic investors may be prepared to exploit. Sin free investment (ex-tobacco, gambling, weapons) until 2015 exerted a cost on long term returns. Since 2015, the evolution of ESG factor-based strategies have gained materially from a net short energy position which added around 150 basis points of excess annual returns through to the onset of the pandemic. It appears increasingly likely much of this may be unwound as higher oil prices create massive outperformance for energy investors as capital allocation has not followed traditional price signals. Despite Norway’s dramatic success in stimulating EV purchases, it has lagged in reducing oil consumption versus peers, largely because the overall fleet mix remains well over 90% conventional. Despite early success for the GM Bolt, a recent spate of ten battery fires has caused a massive recall of 142,000 vehicles and resulted in a major dispute between GM and battery supplier LG. It is not so long since LG was forced to walk away from battery supply arrangements with VW after both firms realized the prerequisite battery materials could not be secured.

Recent studies suggest the provision of carbon offsets on LNG cargoes may add between 17 to 37% to the overall unit price of the natural gas. Should financial speculators bid up these credits in an under-supplied market, these impacts could rise significantly. This is all happening around the backdrop of surging conventional natural gas prices, as associated gas production from oil operations has been pared back. Meanwhile, low wind generation rates in Europe have placed increased demand on fossil fuel generators. While this has had the desired impact on carbon prices, it was not intended that coal producers should see a tripling in market prices to $170/T. Further, spot power prices in Europe have traded over double the ten-year average, forcing the Spanish authorities to cap utility profits. These price increases in turn create the opposite incentive otherwise intended, as conventional car drivers avoid these surging power prices borne by EV drivers. 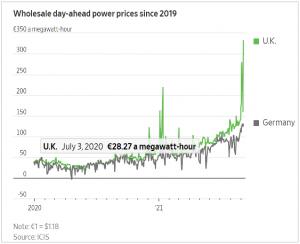 Aluminum prices recently surged to a five year high, while iron ore prices more than tripled as policy constraints forced market dislocations. Spot uranium prices traded up through the long term contract price last week signaling a dramatic tightening in the supply demand relationship. Perhaps the most ironic example occurred in California. In order to relieve demand on the grid, the state is proposing to pay commercial customers $2/KWh to go off-grid and self-generate, a price ten times the normal rate.

As capital is allocated increasingly by social rather than return driven criteria, it is right to expect the unexpected. Given the nexus between carbon and the massive energy sector, it is prudent to anticipate sub-optimal results in the various downstream markets. Could it be these surging energy prices become the brake on economic activity traditionally delivered via monetary policy. Could this represent the worst of all worlds – STAGFLATION?

The LNG industry is one of the world’s most capital intensive activities. When the largest super majors are purchasing carbon offsets to provide carbon neutral solutions on such a scale, and carbon intensive industries in Europe are paying Eur62/T for carbon permits, it is time to understand what is at stake and how these markets are expanding.

The Family Office Association in conjunction with Accordia Group is seeking to provide thought leadership in this challenging but potentially lucrative domain. The team will leverage its broad relationships in these markets with FOA’s unique client network to generate innovative content in written and digital meeting format with experts across the spectrum.

This website is using one or more 3rd party services that allows it to provide better experience to its visitors.

One of such services is Google reCaptcha.

This website is using one or more forms through which visitors are able to interact with us. In order to prevent unnecessary spam and other kind of malicious content, we have integrated Google reCaptcha service that, in turn, creates several cookies needed for it to function properly.

Website is also employing Google Analytics service to track the ways visitors are coming to it and what parts of the website they find the most interesting. This service also creates several cookies, some of which are listed here.

Any cookies that may not be particularly necessary for the website to function and is used specifically to collect user personal data via analytics, ads, other embedded contents are termed as non-necessary cookies. It is mandatory to procure user consent prior to running these cookies on your website.